Walt Disney first introduced the theme park concept back in 1955, with the official opening of Disneyland in Anaheim, California. It created a sense of total wonderment for kids and adults alike and began a new industry of thrilling all day outdoor entertainment, with amusement rides, shows, concerts, themed shops, and dining . Since then, theme parks have evolved and become more sophisticated as technology advances and new social trends have taken hold.

Several years ago, and after nearly 19 years of entertaining tourists from around Australia and the world, Wonderland Sydney closed its gates. A turbulent history and a lack of true corporate backing could be held responsible for the closure of this Sydney icon, even if the park's management said otherwise. The park opened on December 7th, 1985, with just three themed areas. Although the park always had great potential, it often failed to live up to its hype.

Drawing inspiration from the original incarnation of Wonderland, we are seeking to tap into this spirit of history and nostalgia associcated with the original Wonderland, while at the same time providing a modern theme park experience that is expected of by guests in the 21st century. The park will feature state of the art rides and attractions targeted at all members of the family. While at the same time tapping into some of the historical aspects that made Wonderland a part of the social landscape of Western Sydney throughout the 80's and 90's.

There are various reasons that trigger the introduction of the Western Sydney Theme Park precinct to Sydney. Tourism growth and infrastructure development for Sydney and NSW are just the beginning. The precinct will fill a large hole in Sydney’s tourism industry with a much needed hub of recreation and entertainment. This will bring with it substantial employment and business opportunities across all of Western Sydney. It can be said that this Western Sydney Theme Park will have the potential to play an exciting role of national significance.

Western Sydney is Sydney’s major future growth area with significant population and employment growth projected over the next 25 years.The regional economy is fuelled by a resident labour force of over 915,000 people (as at September 2010) with all ranges of educational and vocational attainment. 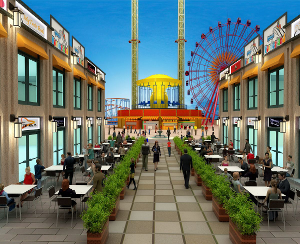